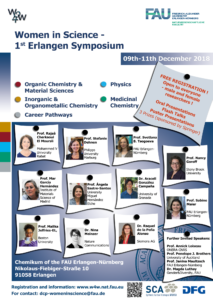 In 2018, we organized for the first time a symposium focusing especially on female scientists at the FAU Erlangen-Nürnberg. We came up with the idea of this symposium given the still encountered unbalanced gender distribution in Professor and Chair Positions within most universities, specially in the field of natural sciences. Hence, we want to bring attention and highlight the scientific achievements, as well as the career development of female scientists around the world.

Several aspects give this symposium an outstanding character: the organizing committee is composed of only women, female PhD students and Post Docs from the Department of Chemistry and Pharmacy of FAU, and only female speakers, selected from an international scientific platform, are going to be invited to the symposium.

Aiming at giving an impression of how women can succeed in science, every invited speaker is especially asked to give an overview over their scientific career development prior to presenting their scientific achievements. In addition to this, we plan to invite women from international peer-review journal and companies to offer an overview over different career pathways. Furthermore, round table discussions will be organized, during which the attending students have the opportunity to ask the invited speakers about their scientific career development.

This symposium gives female researchers not only the possibility to present their scientific achievements, but also the way they succeeded. On the other hand, the next generation scientists gets insights into possible career pathways and the possibility to network and establish collaborations with women who have already succeeded in science.

The symposium is open to everybody and we highly encourage young researchers, both female and male, to register. Apart from invited talks and round table discussion, poster sessions will be organized, giving the attending students the opportunity to present their scientific work and promoting further discussions and possible collaborations.

Further information can be found following this Link: